“Where is Ofelia?” stands as one of the most frequently asked question on every Fear fans lips this season.

When we last saw Mason’s character at the end of Season 2, she came into contact with Dayton Callie’s Jeremiah just past the US side of the American/Mexico border, yet her fate was unanswered. Questions as to where Ofelia has been however, were answered in Monday night’s 2-hour mid-season finale.

Mason, who has been an integral part to the show’s DNA since the first season, spoke with AMC UK about her characters absence and how Ofelia has changed over the years. Most importantly she decided she was up for playing a few rounds of this or that, in which we got a little sneak peek into the way Mason’s mind works…

What was your initial reaction when you were told that you wouldn’t be appearing until episode 7?

I actually didn’t find out [until much later]. They kept to just not telling me. Initially I was supposed to come in in episode 3. My husband and I were actually on vacation…so we ended up just staying a bit longer. And then it went to episode 3. And then I was told “No, you’re actually coming back in 5”. And then “We’re also we’re thinking 7”. So I’m not quite sure, to be honest, what happened.

What was your reaction to finding out Daniel Salazar would be returning?

We love Ruben [Blades, who plays Daniel], we love the character. We knew from last season that he hadn’t been killed off…we knew he was coming back, we just had no idea when. Everything was kept a secret. So when I was told – Ruben emailed me and was like “Hey, I’m back – where are you?” And I was like “Ahh! Funny story, been here for a while.”

The Salazar family and Ofelia has gone through so much. She thought that he’s dead. She sort of ironically followed in his footsteps and understands him far more than she had prior. When she found out that he had been this torturer after the Salvadorian wars, she lost respect for him, she didn’t know who he was and felt betrayed. Hopefully, when they meet, it’ll be this beautiful day of “meet the new me and then maybe we can go on a killing spree together”. So just the normal father-daughter bonding!

How much do you think Ofelia has changed since we last saw her?

Dramatically! Dramatically for Season 1 at least. She showed up in that little babydoll dress with a big braid. She didn’t even want to tell her parents that she had a fiancé or a future fiancé because she didn’t want to ruffle their feathers or upset them. And now she’s… The last we saw of her, she killed an altar boy. So I think she’s changed a little bit!

That’s Sophie’s Choice! My favourite stunt scene has been something we actually just recently shot, where I ended up scaling a wall, I had a harness on. It was pretty violent.

Are there any cast members or actors that you would love to see join the show.

Yvette Nicole Brown, she’s such a huge fan. I love her so much. I find her so charming and so adorable. She should play something – give the girl something to do! Like she comes in for an episode and is a complete psycho – play against her sweet, sweet face. I think that would be amazing. Just ‘cause I’ve done a few Talking Dead’s with her now – she’s just the sweetest. 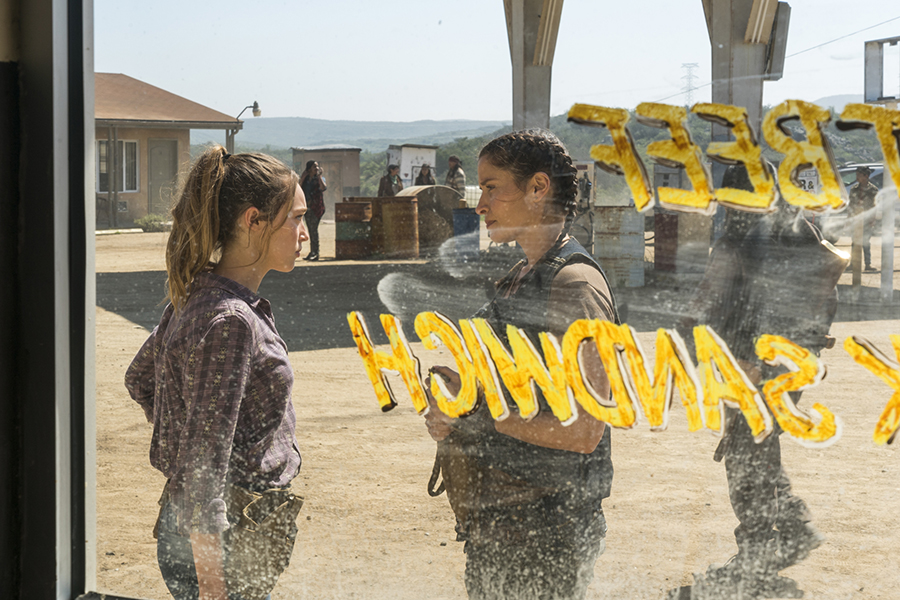 Alycia Debnam-Carey as Alicia Clark and Mercedes Mason as Ofelia Salazar shortly after being reunited in season 3.

I saw on Instagram recently, you shared a picture of you and Jennifer Aniston from your first ever –

Your first ever film! And you mentioned that your scenes got cut in The Break-Up. Could you tell us a bit about what it was like being on set for the first time, and what your scenes were in it?

My agent at the time was like “Honey, there’s this little part that’s come up – why don’t you just go audition for it.” It was like an absolute cattle call, just like 200 girls…I didn’t know what I was doing, it was two lines. I just start joking around. I get the call back! My agent was like “Whatever you did, do it again.” So I come and Peyton Reed, who was the director just start joking with each other. So he and I start busting each other’s balls. I’m sitting, there was this huge light and I was wearing this pencil skirt of see-through material and so I apologise, I’m like “I’m sorry, guys, I didn’t know this was gonna be lit this way.” We just start laughing. And then literally in the room, they were like “By the way, you totally have this job.” I’m like “Acting is the easiest thing in the world!”

The whole idea initially, the end to the film, Vince [Vaughn’s character] was supposed to end up with somebody else, and Jennifer Aniston was supposed to end up with somebody else who were completely different from what they are. So he was gonna pick me up at a bar, and she was gonna find some other guy, then show them on the street and that was that. Ultimately, Vince was just so sweet. He just said like “Be calm, be yourself.” He was really so sweet about it. The scene got cut! But I got my first manager out of that, I got my first agent out of that.

We’re almost out of time. But I’m just gonna do a quick word association game. So I’ve got a few words. And I want you to say the first thing that comes into your head.

The first word is “Skull”.

Well, that’s it. Thank you so much, Mercedes.

You guys are so much fun!