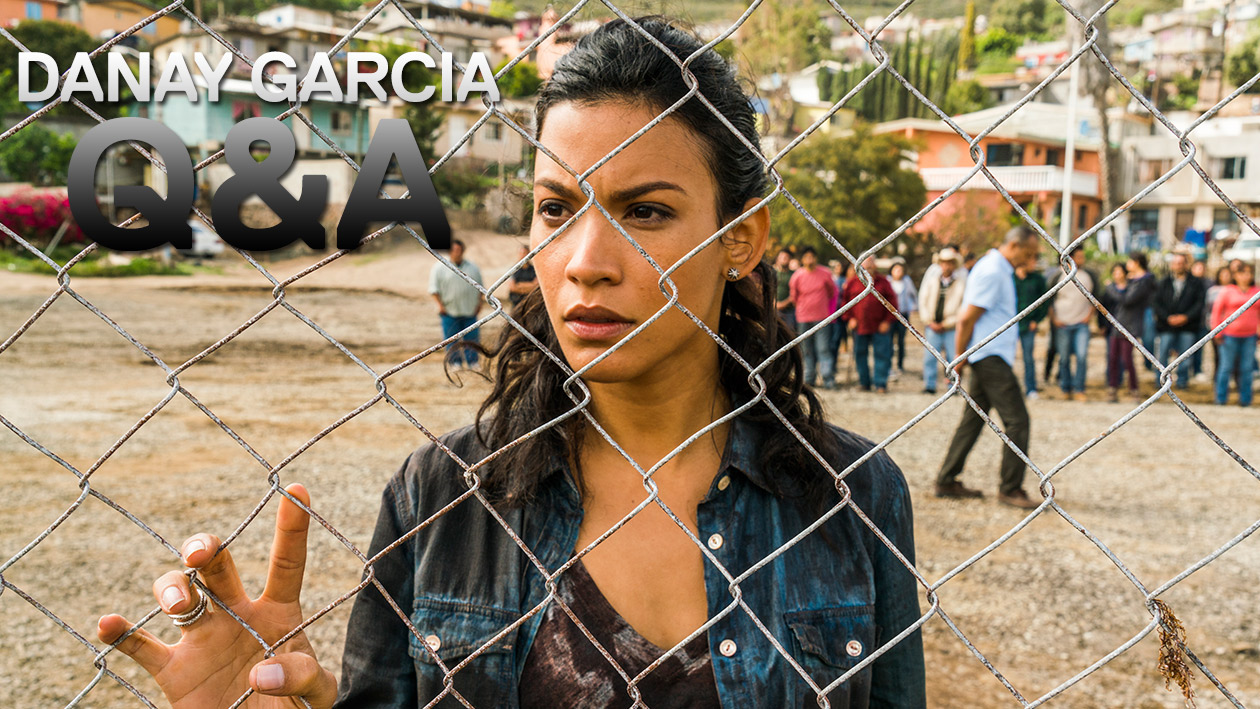 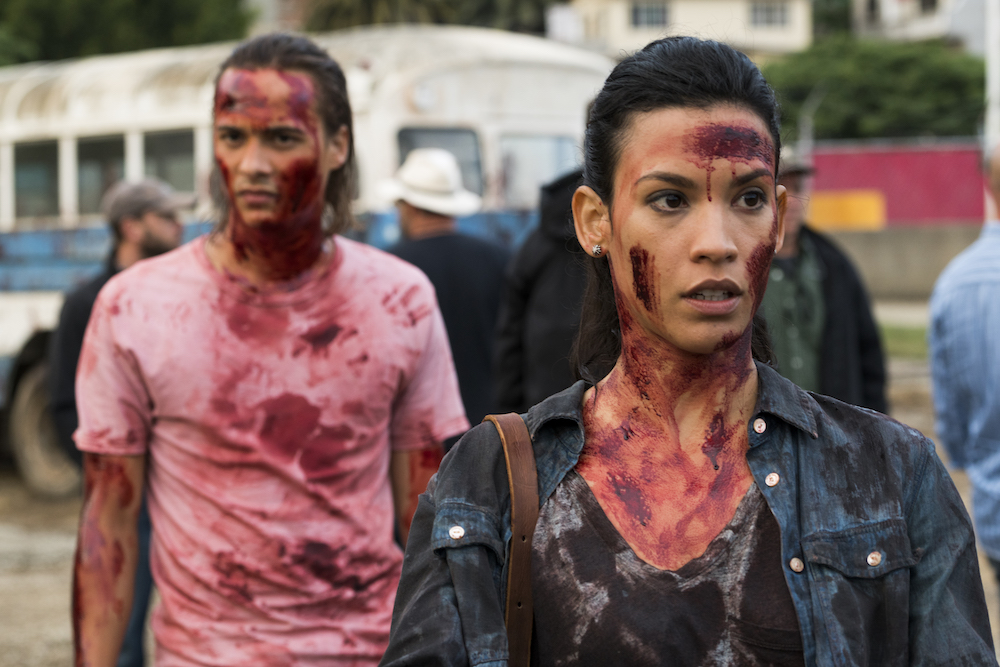 Danay Garcia, who plays Luciana on AMC’s Fear the Walking Dead, talks about what “the wall” means to La Colonia, her bloody welcome to set and teaching Spanish to Frank Dillane.

Q: What immediately stood out to you about Luciana?

A: First off, the fact that we’re in an apocalypse just set the tone completely. In this world, we lose so many people – our loved ones get infected, and they die. When everything is taken away from you, when there’s nothing left other than humans… we change, we adjust and we adapt. I focused on how capable she was to adapt and how much she could stretch herself to survive. When you’re in high-stakes circumstances, you have to have a strong mindset. In hard times, that’s when your personality shines and you discover parts of yourself that you never knew before. I challenged myself as an actor to discover the passion she had. She feels that abandonment factor, but still overcomes it and finds a tribe. At any time, she can lose someone and as humans, we’re just not trained to lose people we love. We want to hang onto them forever. What impacted me was her ability to let go and to hang onto what was still around her to survive. That was amazing.

Q: Only two episodes in and you’re covered in the blood of the Infected! Was that a nice welcome to this set?

A: The first time I showed up, all I saw was a bunch of people full of blood. [Laughs] I thought, “At some point, that’s going to happen to me.” That point ended up being the next day, and I was covered in blood… Just another day on set! [Laughs]

Q: Talk a little bit about what’s going on with “the wall” in Episode 9. Are people sacrificing themselves for their community?

A: The Mexican culture has three kinds of deaths, and their relationship with death is super unique. There’s the day you die, the day you get buried and the day you’re forgotten. When this apocalypse happened, the dead weren’t buried and they’re used as a way to survive from the humans. What they’re really protecting themselves from is not the dead, but the humans. That’s the real danger. So, when anybody gets infected, they have to join the wall. It’s not a sacrifice. They surrender before they infect anybody else that they love inside La Colonia. The dead are our neighbors and friends. We recognize them and of course it’s difficult, but it’s the only way we survive. We protect each other whether we’re dead or alive. To me, that’s an act of love. It’s out of the box, but it makes perfect sense in this circumstance. The saying they say in Spanish is, “From death we come, and to death we give ourselves.” It’s logical to want to protect the people you love. That’s a universal instinct.

Q: Alejandro is pretty intriguing. What do you make of him?

A: Alejandro provides the emotional side of leadership for La Colonia. He’s the man who knows how to put everything they believe into words so that everyone can feel it and understand how to make sense of the world. He’s certainly a survivor in this world. Luciana has massive respect for him and absolutely trusts him, almost like a father. He has done so much for the town and has set the tone so that everyone can find peace in this circumstance.

Q: Why do you suppose Luciana bonds with Nick? Do you see any similarities between them?

A: Nick and Luciana both have an abandonment issue. They’re like two orphans in this world. Nick is an orphan by choice. He left his family behind and went off on his own. At the point in which they meet, they don’t think it’s possible to feel any love again because they’re trained to survive. When they find each other, it feels like they can [survive] together because the commonality of pain and being misunderstood is so massive. They’re brave and they nurture each other.

Q: Did you get to teach Frank Dillane any Spanish?

A: Frank was hilarious because he knew nothing! He didn’t know how to say, “uno,” so I would play with him in Spanish and he would not know what I was talking about. Nick doesn’t know how to speak Spanish, but he’s trying because in order to be in this land, it’s an obstacle he has to overcome. Frank is an incredible and giving actor, and he immersed himself into the language. He really took the dictionary and made notes that he posted all over the set on the props. That was his real handwriting [in the episode]. After a few months of working together in Mexico, buying coffee or whatever, I heard him speak [in Spanish] finally and I thought, “Oh, my God!” I was so proud of him.

Q: Your character is so tough. Was it physically demanding to prepare to play her?

A: Physically, it was a big challenge. I started to feel like a bit of a soldier. I come from a dancing background and I’m used to long hours of physical activity and constantly challenging my body to give my best performance. It gets to you at times, but it was an interesting and beautiful adjustment to this world. On an emotional level, I would sometimes think, “Wow, what a bloody week!” [Laughs] This isn’t a natural environment we’re used to living in. I was happy on Saturdays when I saw everything clean, but it was great because I was dealing with Luciana’s world. So, when I went back to my world I was able to enjoy the best of both worlds.

Q: Nick takes some cake from the grocery store that the gang owns. Besides the practical items like water, what’s one item you would hope to find?

A: I’d like to grab a bag of Oreo cookies. [Laughs] I would be very happy walking back to La Colonia eating chocolate. It doesn’t matter how long it’s been in the grocery store. It will be just as good.

Don’t miss Danay Garcia on Fear the Walking Dead on AMC from BT.